The Pines of Portola

The trees held our secrets. Tall, scraggly, full, brown, bent, straight, leaning, broken, and vibrant, Monterey pines served as the sentries of our property in the hills of Portola Valley, a town just west of Stanford University, about halfway between San Francisco and San Jose. Drenched in Mediterranean heat in the summer, caressed by Pacific […] Continue Reading ↓
Mi Ae Lipe
Flora, Family
01/26/2021

The trees held our secrets.

Tall, scraggly, full, brown, bent, straight, leaning, broken, and vibrant, Monterey pines served as the sentries of our property in the hills of Portola Valley, a town just west of Stanford University, about halfway between San Francisco and San Jose.

Drenched in Mediterranean heat in the summer, caressed by Pacific coastal moisture in the winter, and covering a mere nine square miles, Portola Valley is one of the most affluent places in America, a place where multimillion-dollar homesteads are sprawling but discouraged from being outwardly ostentatious. People here seek small-town privacy and respite from the sprawl, pollution, and congestion of Silicon Valley. Strict building codes prohibit McMansions, and a significant amount of land must surround each home. The town’s residents and their homes often blend into the landscape of horse pastures, meadows, preserves, and rolling hills dotted with venerable California live oaks. If you want to be showy, go live in nearby Los Altos Hills, Atherton, or even Hillsborough, but don’t come to Portola Valley.

Surely these qualities drew my reclusive mother to the area in the early 1970s. Her obsession with isolation, security, and social status was extreme, and one of the ways it manifested was in her profound love of trees.

My dad built much of the A-frame house I grew up in. In the early years, when he wasn’t working on the house, he was building fences and planting trees. Our lot was a square acre and a half that started out level at our driveway and went literally downhill from there. The entire property was left pretty much wild with its native vegetation, but it needed to be contained on all sides to keep unwanted dogs—and the rest of the outside world—out. Building this six-foot fence was a massive task, but at least it had a definite beginning and end. The trees, which lined the whole perimeter, were not so straightforward. 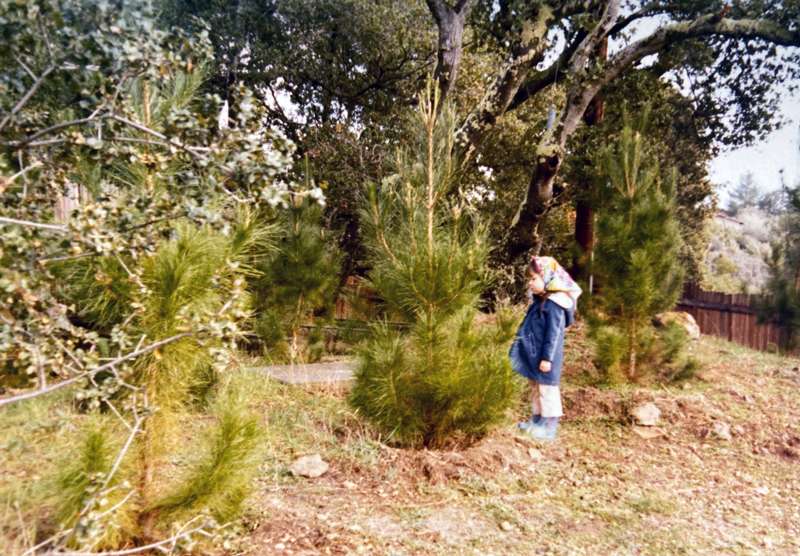 Over the course of several years, my mother had my dad plant about four hundred trees, each one meticulously placed in our arid, unforgiving soil. Almost all of them were Monterey pines, a native evergreen that is one of the most widely cultivated trees on earth but hardly grows in its wild form anywhere else in the world. A few Deodar cedars also joined our arboreal family. Trip after trip to the nursery meant dozens of pots of two-foot-high seedlings piled up along our long driveway and behind the garage. Since my father worked a day job, for many months there was never any uncertainty about how he’d be spending his evenings and weekends.

Very young Montereys are almost unbearably cute with their needle tufts, which can resemble string beans or messy pom-poms. Picturesque Christmas trees they are not. Depending on their environment, their appearance can be astonishingly diverse, and they can grow up to look downright ungainly, with branches awkwardly twisting this way and that, while other specimens of Pinus radiata turn out beautiful, full, towering, and stately. 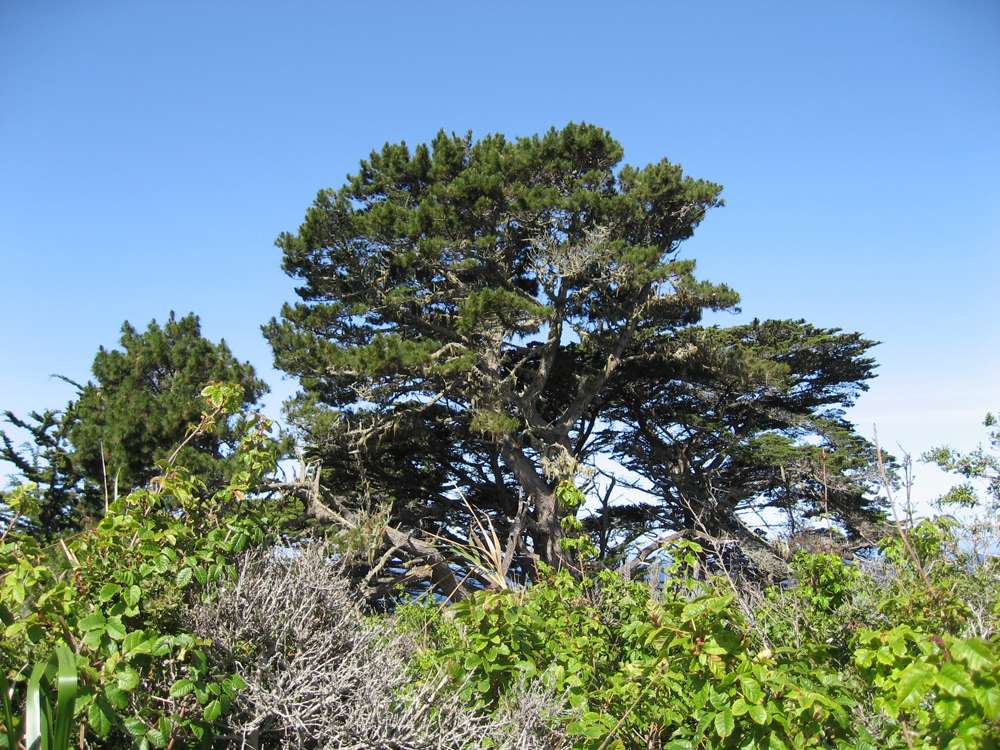 But something they share in common with most conifers is a very shallow root system that stretches horizontally rather than vertically. Our soil was a most unhospitable clay or even just solid rock, as brutally unfriendly to a shovel as to a taproot seeking moisture and stability. As much as my father tried to dig suitable holes for these eager, fast-growing seedlings, they were vulnerable to tipping over during fierce California winter storms.

The Bay Area has two seasons: rainy and not rainy. For six to seven months of the year, nary a drop falls from the sky, leaving the land unspeakably cracked and parched. But between November and February, the skies open wide, the winds come up, and rain falls in cruel torrents, rushing over the parched clay, overwhelming man, flora, and fauna with shocking, watery abundance. No beast or plant is spared, and if the winds are high enough, young pine trees start bending, then falling.

My mother hated sunlight, adoring clouds and rain instead. But when these winter storms threatened her trees, her elation turned to anxiety. First, she’d start fretting, then nag at my dad to go out in the middle of the storm, even in the dead of night, to go check on the pines. Naturally, my dad preferred to wait until morning when he could see better, but then she’d escalate to all-out panic and then hysterical fury. Many were the nights when I could hear the branches of the live oaks scraping our roof as the wind dragged them back and forth while she shrieked at my father. He’d wrap himself up in rain gear, put on his stocking cap, and head out into the driving rain and pitch-dark night, equipped with only a flashlight and rope, carrying out his frantic wife’s quixotic obsessions as he battled a nocturnal gale and struggled to right trees as fast as they were coming down. 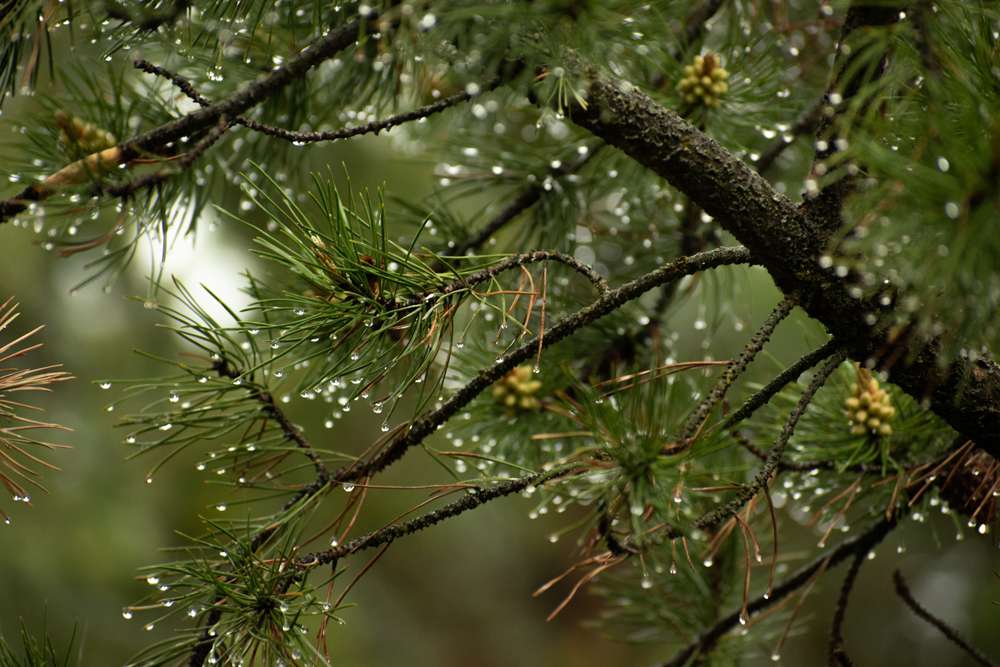 In the daylight calm of a waterlogged morning, we’d survey the casualties. Dozens of Monterey seedlings might be down or leaning or caught up in the branches of their siblings. Rarely was any permanent damage done; like most youngsters, the Montereys were superbly resilient, just needing a little help to get upright, staked, and tethered so they could regrow their taproot and find better gripping points in the harsh soil.

Humans have always assigned a special, primal meaning to trees. We look to them with awe, wonder, and admiration, for literal shelter and protection. As living beings that will likely outlast us by several lifetimes, they also powerfully symbolize stability and longevity.

They are also witnesses.

Witnesses to the futility and destruction of humans and yet their nurturing and worship. Witnesses to a changing world and climate, those stories tucked into ever-widening growth rings. Witnesses to history and perseverance and upheaval. And witnesses to wind, rain, and the storms of a small family who fought for them and loved them. 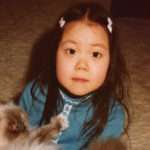 My name is Mi Ae Lipe. Although this blog is mostly about my memoirs of childhood, adolescence, and early adulthood, it also contains fun stuff—poems, art, pictures, observations about the odd and esoteric, random thoughts on modern life, and bits of pure silliness.
family, Monterey pine, Portola Valley, trees

Get notified when new posts are added to Mi Ae’s Story.

Sign up to get notified when new posts are added to the blog.

Share 0
Tweet 0
Share 0
Pin 0
Occasionally this blog covers experiences of abuse, trauma, violence, mental health issues, and other sensitive material. Such posts will be marked with the tag(s) “CW” or “TW” for content or trigger warning.

I welcome and encourage constructive comments but there’ll be no tolerance for any that are abusive, snarky, inappropriate, trolling, or spammy. The opinions I express on this blog are mine alone. This blog occasionally discusses mental-health issues but is not a substitute for any professional treatment or therapy.